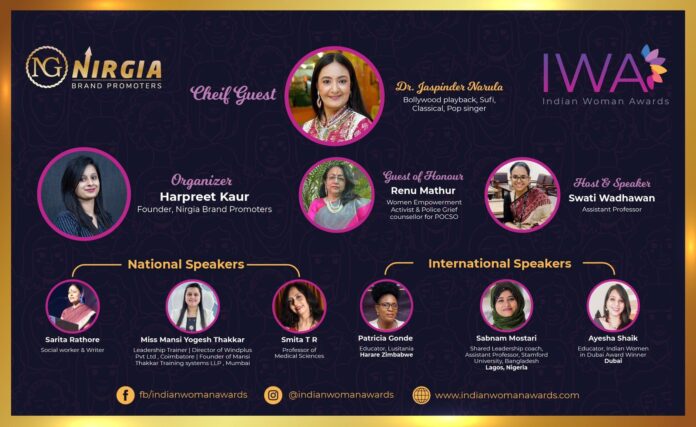 Powered by Nirgia Brand Promoters, The Indian Woman Awards were held in the month of December, recognizing and congratulating Indian women who are performing outstanding jobs in any of the categories. Women have been constrained to symbols of beauty, elegance, motherhood, and housewife since the dawn of time, and as a result, their self-confidence and self-respect have been plundered. However, as time has passed, society has recognized that they have the potential to achieve greater heights.

On December 4th, the Indian Woman Awards, a one-of-a-kind beauty pageant supported by Nirgia Brand Promoters, conducted a virtual award ceremony in which Indian women who are performing commendable jobs in any of the categories were recognized and awarded. Due to the current health crisis, the ceremony was hosted by Swati Wadhawan and held over the virtual platform Zoom.

Dr. Jaspinder Narula was the Chief Guest of the Grand Pageant, while Renu Mathur was the Guest of Honour. Sarita Rathore, Mansi Yogesh Thakkar, Smita TR, Ayesha Shaik from Dubai, Patricia Gonde from Zimbabwe, and Sabnam Mostari from Bangladesh were among the other speakers during the event.

Nirgia Brand Promoters and IWA, founded by Harpreet Kaur, are a forum for encouraging Indian married women who have discovered their potential and achieved great heights while supporting their families and enterprises. “I am lucky enough to have been able to welcome so many creative persons under one roof,” Harpreet Kaur says, expressing her thanks. “Each of them is distinctive in her own way. As a lady, these moments of acknowledgment have filled me with pride”, she added.

An event honoring the best

At the age of 22, Mr. Avijit Ghosh, the musician Became an International Identity Overnight by creating a new world record as a Sales...